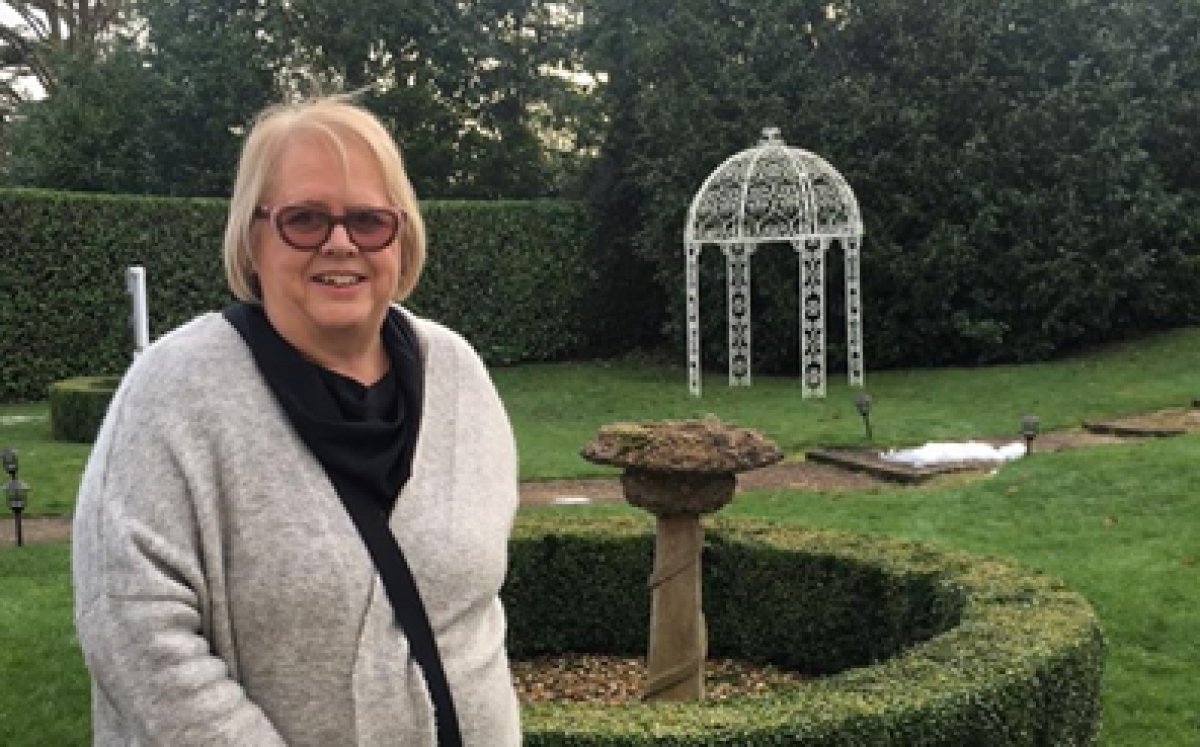 Posted at 00:00h in All About Aubrey by Luke Hayes
0 Likes
Share

Daughter of the celebrated poet May Ivimy, Gill Mastrangelo first approached me at Christmas time as she was attending a festive lunch. Gill had entered our ‘Name That Room’ competition with ‘Miss Ivy Street’ and I was curious to find out why…

Gill, let’s start at the very beginning, where was you born and how did it come about you working here at Aubrey Park?

‘I was born here in Redbourn, and just after the Second World War we lived in number 2 Aubrey Lane which was one of the cottages in that were owned my Mr Dunn. The cottages were quite unique, as they were on stilts, and with the Dunn family being Quakers this made sense. At the time the original building was called Bethnal Green Holiday Home, and my mother was the secretary to Miss Ivy Street; I would help out with the house keeping but I was only a young child at this time.’

Could you tell me more about Miss Ivy Street, what was her role?

‘Well Miss Ivy Street was the Warden here, bit like a general manager. She was in the WRAF (Women’s Royal Air Force) a large lady in height and stature…she was quite intimidating to look at as a child – but such a wonderfully kind person and I stayed in contact with her until she passed away, she was living in one of Church End cottage at the time.’

‘She was really hard-working and ran this place completely by herself. When the Eastenders would travel here to stay in the Holiday Home; she would also entertain the guests…I remember when she held bingo nights and the rowdy Eastenders would get up to do the numbers and I used run and hide!

A funny memory I have of her, was that when locals would kindly donate food, and one being a large marrow. Ivy would hollow out the vegetable and add a concoction to ferment and make her very own gin here. I’m not too sure on the liqueur was, bit like an Aubrey Moonshine. And I remember looking at it thinking ‘what the hell is that!’

As you know during 1920 the Forrester’s Farm was bought by George Dunn the founder of Dunn & Co, then throughout the Second World War the building was possibly used as a children’s home or for something army-based…so how did it become the Bethnal Green Holiday Home after the war?

‘So the Bethnal Green/Hackney City Council bought the home to create a place for working class east-end people to escape the city and probably had day outs to St Albans and Whipsnade Zoo. They were typical EastEnders, even the odd pearly queen would come and they would have a knees up!’

What we had was a regular turnaround of about 20 holiday makers; on a Saturday morning a coach would go with people who had been here for a week and then in that time that the coach had left, we had to change all the beds upstairs. Miss Ivy would run a tight ship, and all the bed sheets had to be in an immaculate envelope shape.’

The Redbourn stop on the Nickey Line, this stopped right outside the Aubrey Park Hotel

I bet Aubrey Park Hotel looks really different to what it did back in the day!

‘Oh yes, if you can imagine if you take away the front of the building, which is the reception and Brasserie. There also used to be stables that were used as accommodation for a couple who worked for Miss Ivy Street too. The Bar area here was a snooker room. All the grounds were beautiful gardens that I remember Miss Ivy would be out with the big lawn mower in the summertime. And there used to be a vegetable patch here too.

And there was a family who lived next door to us; they were called the Rough family. I used to play in the Iron Age fort at the back of the holiday residence with the two sons, we used to go in there and it was well known that you were not allowed in there…

Also there was a chicken farm next door owned by Mr Betts, and I remember the surrounding fields being full of chickens and huts!

So what can you recall about Mr Dunn and his family?

‘I never met Mr Dunn or any of his family, however he was well known in Redbourn. He created the Aubrey Football Cup tournament and also was involved with the cricket played on the Common.

Not only this, Dunn had the Redbourn Village Hall built for his hat makers – they were making bubble hats back in those days mostly.

However, when Luton took more of the work, he sold it to the Redbourn County Council and now the Village Hall …and Mrs Peake used one of the rooms upstairs that is dedicated to work for the youth and now a Girl Guide room and to be knowledge still used for the same thing today.’

Another question we cannot seem to work out, was the residence used as a children’s home during the World Wars?

‘On the web it says that during the war it was used as a children’s refuge but I do not recall that, and I understand that it was something to do with the army.’

Picture found of cadets in Redbourn during WW2

Your mother May Ivimy was an exceptionally talented poet, known for being the founder of the Ver Poets society which is celebrating its 50th anniversary this year. Please could you tell us more about this incredible woman!

‘As I said, she was the secretary to Miss Ivy Street; she would run her reports, invoices etc. She also shared a great friendship with Miss Ivy Street, they got on really well.
My mum was always a busy lady, she not only had founded the Ver Poets, but also introduced WEA (Worker’s Educational Association) to Redbourn – [Founded in 1903, the Workers’ Educational Association (WEA) is a charity and the UK’s largest voluntary sector provider of adult education]. And so it was always poor Gill, on the back of the bike, being dragged around to all these meetings!’

May Ivimy was a lady way ahead of her time! So was it just you two together whilst you were growing up?

‘Well, there was Bernard. So my mother met this student at Cambridge, and he had come from the gold coast which is now Ghana. So he was a black gentleman, so mum had Bernard, so the village where not too accepting of a lady with a mixed race baby. And then I came along,

By this time, Bernard had gone to live with his father, who happened to be the President of Ghana. Bernard’s father was in prison, as there was unrest in Ghana, in Accra for many years because of he’s political persuasion. And so did Bernard have a political career too, and then pursued his career as a priest.

So there was a period of time where there was just mum and me, because Bernard was not being accepted at school and bullied. But he did study law in London, so he came back when I was about 14.’