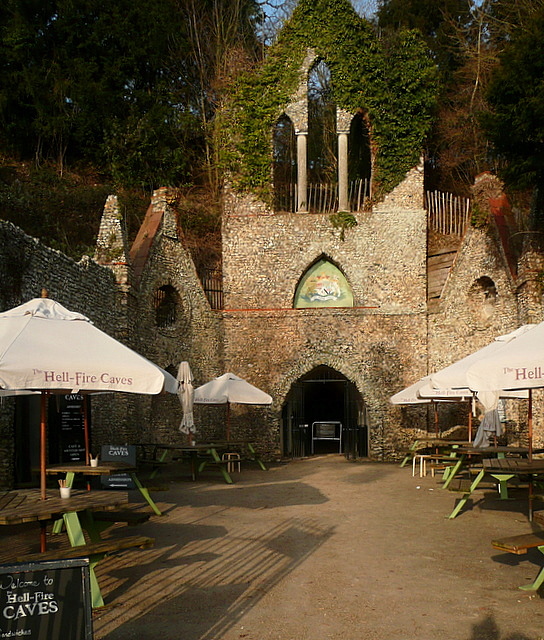 The Hellfire Caves are a remarkable testament to 18th-century excess.

A network of man-made chalk and flint caverns which extend 260m underground, they are situated above the village of West Wycombe, at the southern edge of the Chiltern Hills in Buckinghamshire.

They were excavated between 1748 and 1752 for Francis Dashwood, 11th Baron le Despencer (2nd Baronet), founder of the Dilettanti Society and co-founder of the Hellfire Club, whose meetings were held in the caves. Members included various important 18th-century figures such as William Hogarth, John Wilkes, Thomas Potter and John Montagu, 4th Earl of Sandwich. Though not believed to have been a member, Benjamin Franklin was a close friend of Dashwood who visited the caves on more than one occasion. The caves at West Wycombe were used for meetings in the 1750s and early 1760s. The club motto was Fais ce que tu voudras (“Do what thou wilt”), and club activities included “numerous illicit activities including sex parties, drinking, wenching, and mock rituals” according to reports from the time.

By the early 1760s, the club was no longer very active and it was dissolved by 1766. A local legend claims that the caves are haunted by Sukie, a young maid who was accidentally killed by people playing a practical joke on her. Others claim that the ghost of Paul Whitehead, the former steward of the Hell Fire Club, has been seen in the caves.